Read more about the news from Yacht Style: https://yachtstyle.co/pmg-shipyard-pride-of-thailand/

PMG Shipyard promotes itself as a “custom yacht manufacturer” and focuses on catamarans. Best known internationally for building the new Silent 60 for the fast-growing Silent-Yachts, the PMG Shipyard in Thailand owned by Philippe Guenat also produces its own solar-assisted Heliotrope powercats as well as custom builds in a spectacular two-hectare beachfront facility that’s now also equipped for catamaran refits.

Silent 60 solar-electric catamaran in the Gulf of Thailand

As well as specialising in vinyl infusion, the shipyard packs some serious hardware including a 50-tonne-capacity travel lift that was specially made in China by Magicart. This purpose-built hoist is 9.6m high and has a width of 14.4m so it can transfer cats to the shipyard’s 13m-wide outdoor testing pool, which is 25m long and can take boats up to 80ft. 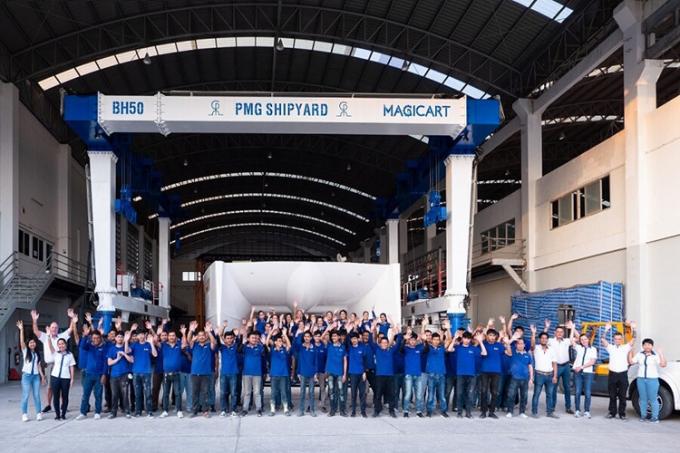 BH50 can be rotated at any angle

2004 —— PMG Shipyard was first established in 2004, as a privately held company with Swiss ownership & management, with strong European presence in the management and key technical positions with world-renowned members of the advisory board.

2008 —— Guenat talked to many shipyards in Europe about his idea for a solar-electric boat, which he was willing to finance, but time and again he was turned away – politely and impolitely.

2009 —— After drawing a blank at the first three shipyards he tried, Guenat was on the cusp of giving up on his quest when he visited Bakri Cono. Inside, he found open-minded support in the form of South African owner Corrie Lamprecht, who was running the yard with his two sons.

2013 —— To put the theory into practice, Guenat built the first Heliotrope 65, which used solar power for all on board systems but not propulsion. The model’s first build, launched in 2013.

Interior of the Heliotrope 65

2016 —— Having moved to live full-time in Thailand, Guenat led to a determination to find a larger site for the shipyard. Philippe Guenat eventually found PMG’s current location in Rayong, which had been a boatbuilding facility since 1976 but was then abandoned. Guenat spent several months, eventually securing the site and beginning a seven-month renovation. In 2016, Bakri Cono officially began operations in the new site where they continued building the Heliotrope 48.

The site has immediate access to water for launching

2019 —— The shipyard’s role in building the Silent 60 evolved in 2019, a year in which Guenat fully bought over the company and renamed it PMG. Around the same time PMG started producing the Silent 60, it also looked set to begin building the Waka 80, an 80ft sailing cat designed by Berrett-Racoupeau. The model was also promoted at the 2019 Cannes Yachting Festival, generating strong interest.The Waka 80 is very appealing because we can build it at the same quality but at a much lower cost than in Europe.

The design of Waka 80

2020 —— Soon after PMG started on the first hulls of the Silent 60, Covid spread across the globe in early 2020, causing delays in shipping parts and forcing restrictions on workers, especially manual labourers. However, Guenat and his team have ploughed through, with five hulls being built simultaneously at one stage. The second Silent 60 had sea trials in August ahead of its delivery to the US.

Compare that to the past five years, when the brand built a total of 11 units of the Silent 64 and 55 in Turkey and China. Guenat believes the success of electric cars is the main driver behind the growing appeal of solar boats. With its expanded production capacity, well trained workforce, specialist hardware like its testing pool, Magicart travel lift and catamaran trailer, as well as immediate seafront access, PMG Shipyard is better equipped than ever.

A new catamaran trailer for both launching and retrieval

MAGICART is a leading manufacturer and service provider of cranes and material handling equipment, dedicated to the R & D, design, manufacturing, installation and service of cranes and material handling technology. Mobile boat hoist crane is a type of mobile gantry crane from MAGICART's independent research and development dept. It owns mature technology, high quality and low price. It is becoming deeply loved by more and more factories. Magicart is constantly improving our own technology, providing customers with more efficient products, and is committed to promoting client's business!